I always think that gift-giving has become a little bit too serious. Do you know what I mean?

Obviously, Christmas is the most extreme time of year for this gifting seriousness – I can still remember the stress that I felt watching Arnie in Jingle All The Way when he was desperately trying to track down a Turbo-Man action figure for his son. And there’s plenty of real-life examples like the shopping panics caused by shortages of Cabbage Patch Kids and Tickle Me Elmos. Shudder… 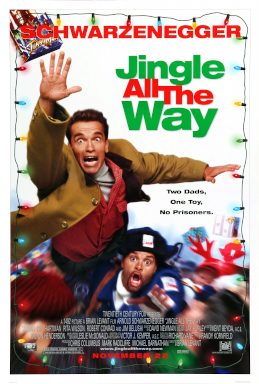 I think we all need to chill out a little really. Yes, gifts should be appreciated by the lucky recipient. If they’re useful, that’s even better. Look good? Awesome.

But what about gifts that raise a smile? Gifts that cause some much-needed chuckles? Presents that make the recipient (hopefully) and everyone else (definitely) have a good old belly laugh?

I think they’re even more important.

Because I want to take some of the stress out of your life, I thought I’d track down some of the best and funniest gifts for cyclists. I hope you like them.

Okay, let’s take a look at some of the great funny gifts for bicyclists.

When I was a kid, we all had these on our bikes and thought we were the coolest guys in the world. Retro is back, yeah? So forcing your lucky gift recipient to put these bright and colorful plastic beads on the spokes of his expensive bike should go down pretty well, I’d have thought. Then just wait for the bike to start rolling along and the familiar clattering noise starts! Aah, music to my ears!

Ibera Bike Handlebar Coffee Cup Holder for Commuters
If your cyclist is also an avid coffee (or tea) drinker, then this is a funny gift that should also prove surprisingly useful to them. If you’ve ever tried cycling along one-handed, whilst holding a cup of coffee in the other hand…then you’ll know the unpleasant feeling of warm liquid dribbling down the thighs of your pale-colored slacks. Not nice and hard to explain when you arrive at the office.

Poke a little fun with this stylish cup holder and then bask in their appreciation as they experience wafting along on the aroma of freshly-brewed cappuccino on their morning bike commute.

Funny Mark Twain Get a Bicycle Quote Key Ring Bottle Opener
I’m a fan of three things in life: Mark Twain quotes, key rings, and bottle openers. For that reason, I was in love from the first moment that I saw this keyring. I often find that Mark Twain has ‘apparently’ said something quotable about every subject in the world. This is a genuine one though and it’s taken from his essay, ‘Taming the bicycle’ an amusing read in itself.  This makes a great gift for any cyclist, but particularly the more accident-prone ones.

‘I’m Silently Judging Your Bike’ PopSockets Phone Grip
If you’re not aware of what PopSockets are, then just ask a handy teenager. Basically they are a great little tool that attaches to the back of your cell phone and can be used to hold the phone without fear of dropping it and stand it upright on a surface. Cyclists are always looking at other people’s bikes, either smugly (because theirs is better) or in envy (because theirs isn’t as good). Let them know that they’re not judging other bikes as silently as they might think.

‘You can buy Happiness it’s called a Bike’ Notebook
This funny notebook makes a useful conversation-starter for the cyclist. Cyclists always love to talk about bikes and cycling, as you’ve probably noticed by now. When they’re on the bike, that’s easy for them. But, off the bike, they need something to tell people that they’re a cyclist. A notebook like this is ideal, because other people will see it and go, “Ok, so you ride bikes do you?” and the cyclist will be able to say, “Yes, I do, and did I tell you about the time when I was cycling through the Australian outback and I.

Bike Life Cycles Art Print
This wall art print definitely caught my eye the first time I saw it. Everyone loves a bit of home décor that tells visitors about their hobbies and interests and this one really fits the bill.

They’ll be able to look over the fantastic illustrations to find which type of cyclist they are (maybe the ‘Mountaineer’ or the ‘Athlete’).

Everyone else will look at the illustrations and know in reality they’re either the ‘Amateur’ or the ‘Old-Timer’.

Ass Savers 4th Generation Clip-On Bicycle Fender
Let’s now move to a gift idea that’s got a comedy name, but a deadly serious intent. The Ass Saver is an awesome piece of bike kit – I’ve got a couple of them and they work brilliantly. Unlike a traditional bike fender / mudguard, which is permanently fitted, these are designed to be attached to the bike only when the weather takes a turn for the worse. They slot into place in a few seconds and do a great job of protecting the delighted cyclist from all the mud and puddles.

Bicycle Balls
Looking for a gift idea that is both funny AND useful?! Phew, you don’t ask a lot, do you?

As it happens though I found something that should fit the bill nicely. Ever heard of Bicycle Balls? These are brilliant. Light-up dangly testicles that hang from the underside of the bike saddle and sway from side to side as the (generally, male cyclist) pedals along. Because they’re very funny to look at they also serve a very practical purpose. As a road user, your attention is normally drawn to things that look a little out-of-the-ordinary. Bike Balls? Safe cycling and amusement for all.

Never Underestimate An Old Guy On A Bicycle Funny Cycling T-Shirt
Middle-aged guys on bikes in their tight spandex often come in for a fair amount of jokes at their expense. Your job is to help give a little more and this T-shirt is perfect for that.

At the same time though, it’s also a bit of a compliment (cycling can help keep the pounds off, after all) and does make a useful off-the-bike conversation-starter for them. So, everyone’s a winner.

‘You’re the best cyclist keep that shit up’ mug
We’ve already had a look at coffee accessories for cyclists and if you drew a high school mathematics Venn diagram with a ‘Coffee’ circle and a ‘Cyclist’ circle, then there’d be some serious overlap.

Add in the whole off-bike conversation-starter thing as well and this is brilliant.

Published in 1964 this might be a fantastic funny gift for a cyclist who was born in this year.

Or maybe it was a book that they probably read as a child. It might also be a great choice for a cycling mom or dad to read to their kids. Classic children’s books like this always go down well.

Choosing gifts can be tricky and stressful, and I think there’s just too much stress and seriousness in the world today. If you’ve got a cyclist that you’re looking to buy a gift for and you’re like to get them a funny gift, then I hope this has been useful?

There are lots of great cycling gifts to pick from, to suit a wide range of budgets and tastes, and these are certain to create some smiles.

Leave the stress of gift buying to Mr. Schwarzenegger and bag yourself one of these funnies.

**Please note that our reviews are based on customer reviews, star ratings, and online complaints. Therefore Bicycle Volt are in no way liable**

Everything you ever wanted to know about ebikes. All on one page.